As of July 1, 2013 the Montesquieu Institute welcomes Marcello Carammia as a fellow. Marcello is a lecturer in European politics at the Institute for European Studies of the University of Malta, that he joined in October 2011. 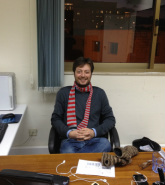 At the Institute, he teaches courses on Italian politics, political parties, comparative federalism, political science, and is the holder of a Jean Monnet Module on Agenda-Setting in the EU funded by the European Commission.

He received a PhD in Comparative and European Politics from the University of Siena in 2008. Between 2009 and 2011 he was a post-doctoral fellow and adjunct professor at the University of Catania. He has been a visiting scholar at the universities of Sheffield, Zaragoza, and at the Center for European Studies of the University of North Carolina at Chapel Hill.